I try not to vent a lot on this blog. I want it to be a productive space. But today, I just need to let it out.

For the last two days my wife and I have been home with our six-year-old son. The Minneapolis Public Schools deemed it was too dangerous for staff and students to attend school due to the extreme cold temperatures (Note: it was in the single-digits below zero in the morning hours with 20-30 below wind chills) and excessive snow (Note: We received 20-plus inches of snow on Saturday). But, this post isn’t about whether the kids should have been in school or not. It’s about the way in which the Minneapolis Public Schools communicated and shared the news that school was cancelled both days, because I believe there are some lessons we can all glean from how this scenario has played out to date.

First, let’s start with the timeline. As you may know, the Twin Cities was pulverized by a winter storm on Saturday dumping 17-plus inches of snow around the metro (want proof? Here’s video of the MetroDome collapsing as a result early Sun. morning). Most of us spent the better part of Sunday digging out.

As we wound down our day, my wife and I watched the 10 p.m. news Sunday night. We both noted (curiously) that St. Paul Public Schools had canceled classes for Monday. But, no word from Minneapolis Public Schools during that same broadcast (I believe we were watching KSTP-TV at the time; and my wife tells me there was no official word posted on the MPS Web site). 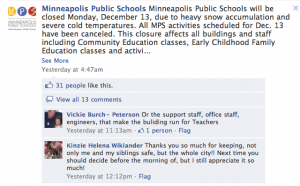 At 4:47 a.m. MPS officially canceled school for Monday–here’s the Facebook post alerting folks in case you were refreshing your browser in the middle of the night.

On Monday morning at 6:15 a.m. we get a call–it’s a broadcast voice mail from the director of communications from MPS. School has been canceled. It’s important to note that my son’s school BEGINS at 7:25 a.m.–just over an hour later.

Later, Monday evening, we get another call (can’t pinpoint time on this one). School has been canceled again for Tuesday. Same reasons as the first day. Again, broadcast voice mail from the director of communications. And, I noticed this post on the MPS Facebook page (BEFORE an official announcement from them). 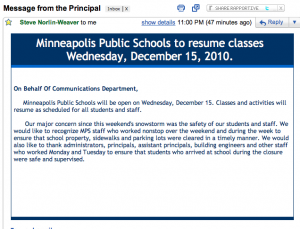 Finally, we receive this email from someone (more on that in a moment) at MPS late Tuesday evening (it’s time-stamped 11 p.m.) explaining that school would be open Wed. and recognizing the staff for all their hard work over the weekend and Mon./Tues.

As you can imagine, as a dual-income family, neither my wife or I were thrilled with MPS’ decision to cancel school two days in a row. However, again, we were far less thrilled in the manner in which this was communicated to us (Note: We are first-time parents here–our son is in kindergarten; just for full disclosure). Allow me to elaborate–and share the lessons I think we can all learn from this experience:

* Think about the timing of your messages–down to the minute. Mainly, I’m talking about the first message here. You send me a message that school is canceled AN HOUR before classes begin! That leaves working parents like us a whole 60 minutes to formulate plan B. For a family in which both parents work (we’re not the only ones obviously), that’s a big problem. We all knew about the storm. We saw the results play out Sunday. Why not share a message late in the afternoon on Sunday? Clearly, people were clamoring for a decision–you saw that on the MPS Facebook page. By announcing it Sunday afternoon, you could have given parents a whole evening to plan our daycare options for their kid(s) the next day.

Also, note the fact that Monday’s announcement of Tuesday’s cancellation went to the general public (via mainstream media outlets) before it was communicated with parents (or, before MPS even communicated it directly with folks via Facebook and Twitter). Why not start with key audiences first (parents) and work out from there?

Finally, note the time of the “explanation” message on Tuesday evening–11 p.m. Who’s up at 11 p.m. to read that message)? Why not send that note at 8 p.m. when parents are just settling in the for the night and checking email after the kids go to bed? Again, think about timing (down to the minute thanks to real-time social networks like Twitter and Facebook) when communicating key messages during challenging circumstances.

* Think about who should relay the message. Both voice mails were from the director of communications for MPS. I have never met this person. However, I have met my son’s teacher. His principal. And a few other teachers at the school he attends. Wouldn’t it make more sense if a message like canceling school came from someone you knew? I realize their are efficiencies the District is trying to achieve by sending out the same message to all parents (and a consistency of message angle, too), but couldn’t you provide a simple template and send to the principals for them to record and send, just like the communications director did? Would it be more work? Yes. Would there be a chance one of the local principals might mess up the messaging? Sure. But, it would be more credible and relevant coming from someone I know and see almost every day.

My bigger concern here is the email. The subject line reads: “Message from the Principal.” But, the email address of the sender (Stever Norlin-Weaver) doesn’t match up with the principal from my son’s school. There’s no sign off. So, who is this message really from? I literally have no idea. That’s a bit of a problem, don’t you think?

* Think about your key audiences when composing the message. I’m looking squarely at the “explanation” message here. The lead is fine (basically, “we’re open tomorrow”). It’s the next paragraph that concerns me. Not one mention of “we’re sorry for the inconvenience this may have caused your family.” Or, “we hope this message finds you and your family well/safe.” But, instead the message immediately recognizes the MPS staff that worked so hard the last few days. Now, it’s fine to recognize your team–in fact, in many ways I applaud MPS for taking this tack. But, that’s really an internal message. I don’t necessarily care about how hard the staff worked as a parent. I care about my kid and me–in that order (sorry–harsh reality, and I think most people would agree if they were honest with themselves). And, oh, by the way, at my son’s school, I didn’t see one person working over the weekend or on Monday. The sidewalks and parking lots were not plowed until TUESDAY. So, for me, that “hard work” message fell on deaf ears. Know your audience when crafting your messages–and think about what’s top-of-mind for them and what they care about.

Again, sorry for the rant again today folks. And I don’t mean to come down hard on the MPS–I really don’t. But, as a parent (and a communicator), I’m a bit frustrated. And, maybe more importantly, I do think we can learn a few things from the scenario I’ve outlined above.

What do you think? Am I right in my assessment from a communications perspective? Or, am I a crazy parent of a kindergartner? (Note: I won’t fault you if you say I’m the latter–it’s OK, I know I’m a little nuts when it comes to my kids). 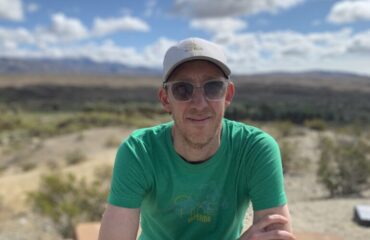 Learning from Failures and Successes in the Crappiest Year Ever 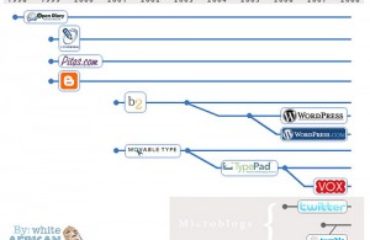 How to: Choose the right blog tool