12 tips for CEOs who are considering starting a blog

Received a good (and common) question from a former client last week: My CEO is thinking of blogging. What tips and advice do you have for him? And, what examples of other CEO blogs would you recommend he follow?

Last I checked, there were more than 150 CEO bloggers (and that’s probably a dated number), so we’re not talking about a vocal majority here. I think it’s still pretty rare for a CEO to blog. And, if you talk about the CEOs blogging well, that groups gets a LOT smaller.

Back to the tips. What would I suggest to a new CEO blogger? Here are 12 pieces of advice:

Be a thought leader

George Colony has a lot of ideas. And, he’s not afraid to share them on his blog, aptly named “The Counterintuitive CEO.” Colony, the CEO at Forrester, weighs in regularly on trends (cloud computing, trends, (Chrombooks) and newsworthy industry topics (Steve Jobs death, recently). He doesn’t blog all that often–only five times since Aug. 1. But, his post are always (OK, mostly) centered around thought leadership. As it should for the CEO of a research firm that gets paid hansomely for their ideas (hello, Jeremiah Owyang, anyone?). Your CEO has the exact same opportunity. Encourage him/her to weigh in on industry issues. Provide their take on trends. And, give his/her take on current events in your niche. Becoming a thought leader online has many advantages–most of which is differentiating your business and making it more “human” by putting your biggest voice forward.

Resist the urge to sell your product/service

This might be the toughest bullet for CEOs. By nature of their very job, they’re predisposed to always sell their company. But, with blogging, as most of us know, it’s not about the hard sell. It’s about providing useful and relevant information. It’s about helping your customers. And, it’s about the relationship sell–not the hard sell. Posts that help your customers live a healthier, happier and more productive life–those will resonate. Those that laud your product or service will likely fall on deaf ears–and you’ll lose your audience before you even gained their trust.

I read an interesting stat recently: 57% of corporate blogs report they’ve generated at least one lead from their blog in the last year. Clearly, that’s not solely the result of CEOs who blog, but CEOs can certainly play a role. Take Richard Edelman, for example. His long-running 6 a.m. blog (blogging since Sept. 2004) includes a number of posts that subtlely (and sometimes not so subtlely( drive leads for Edelman. Take his post on Sept. 16 where he talks about data visualization. Clearly, this is a selling point for Edelman. I mean, just look at one of their senior vice presidents, David Armano. The guy has built an entire reputation around data visualization. Clearly, Edelman knows this and Richard’s blog highlights that point. He doesn’t oversell it in the post–but he talks about the topic and mentions how Edelman has embraced this way of thinking. How can your CEO drive leads without over-selling the organization?

Identify a time to blog–and stick to it

This tip isn’t really unique to CEOs–but it may hold more weight for executives given their schedules. If it’s not on the calendar, it doesn’t exist. So, why not block a half hour to an hour to kick out that blog post? I know time is valuable at that level, but by setting aside time, you’ll also learn real quick how committed you are to blogging for business.

Communicate during times of need 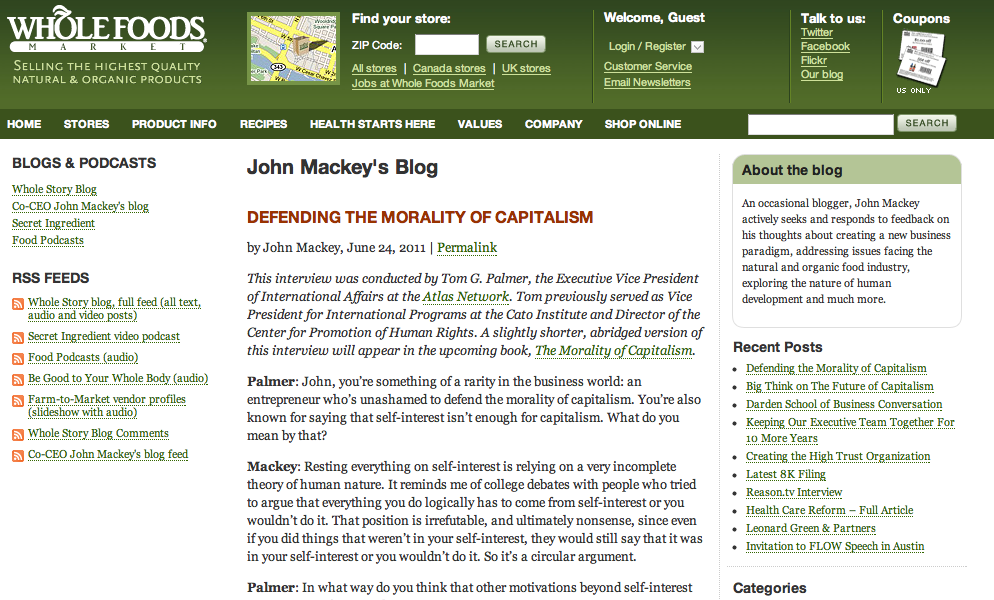 In times of crisis, companies act in a variety of ways. Some choose to be more conservative in their approach–almost to the point where it appears they’re ignoring key audiences (BP). Others are out-in-front of the crisis, communicating key information around the clock. How does a CEO blog fit into this point? Simple. A CEO blog gives your chief honcho a voice during a crisis. Sure, you can put your CEO in front of the cameras and let the media report on his statements. But, ultimately, it will be the reporter’s words–not his/hers. Of course, the media reports may have more credibility, given that fact, but a blog gives your CEO (and your organization) a pivotal voice in times of need. Just consider John Mackey, now c0-CEO of Whole Foods. Remember the whole op-ed kerfuffle in 2009? Remember this post he wrote? Now, you could argue the boycott was too far down the road by the time he wrote this, but I’m just talking about the concept here–Mackey had a platform to share his perspective on why he wrote the op-ed. To explain himself a bit more. And, he took it.

There’s an old rule in blogging–you’ll never get a large readership by playing it safe. By sharing the same opinion as everyone else. You need to take a risk every now and then. Maybe your opinion is radically different than what the rest of the industry is thinking–so what? Share it and that post is bound to be shared liberally. Because, those who opine against the popular viewpoint often get shared as much as those who are the loudest voices in the industry. CEOs, by their very nature, are usually fairly conservative people. It’s your job to coach them to get away from that mindset when blogging and let their opinions come through. If they’re not comfortable doing that, it’s probably not worth their time to blog. It really is as simple as that. 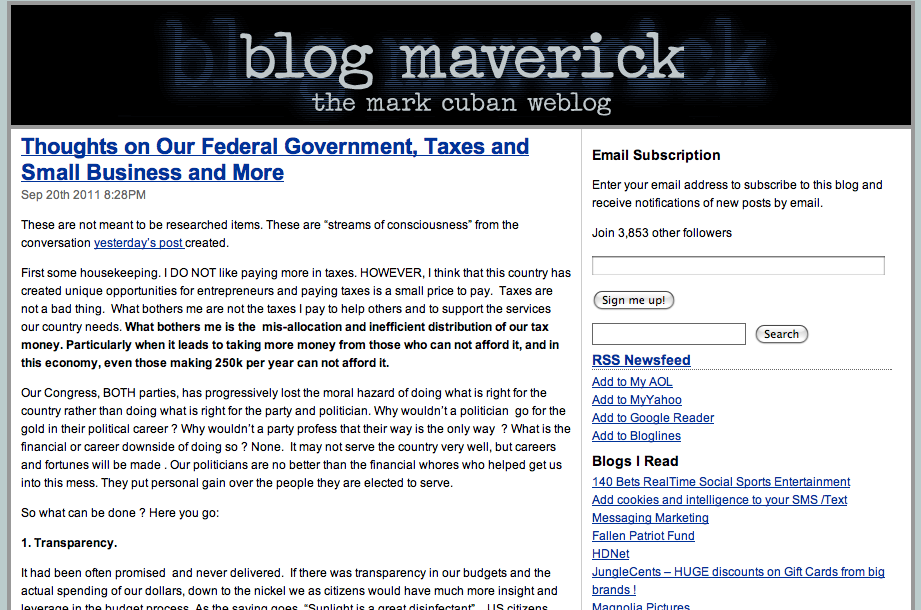 Most people by now have heard of Mark Cuban, right? Even if you don’t follow basketball (he owns the world champ Dallas Mavericks), you’ve undoubtedly heard of the ultimate CEO Maverick (serendipitous that he owns the Mavericks, isn’t it?). But, what you might not know is that Mark Cuban is a prolific CEO blogger. He’s been blogging longer than many everyday bloggers. And, in Mark’s blog, he can get pretty personal. How personal? How about talking about a colonoscopy? In the post, Cuban talks about how nervous he was to go in for the procedure. He talks about “farts.” And, he talks about how easy it was and how he’d do it every year, if he had to (and, and by the way, the post had 177 comments). Now, THAT’S personal. Don’t see too many CEOs talking about sticking a flexible tube up your rear-end now do you? And why? Because he wanted to help others. What does this have to do with basketball or his “customers?” Not much, really. But, it makes Cuban a human being. It makes him real. It makes him approachable (remember, he’s a CEO). And, if you know anyone that’s ever met him, that comes off in real-life, too. It’s part of his “brand” as a CEO and it’s a big part of what separates him from other sports CEOs.

For the busy CEO, this is a tactic worth considering. Even if you’re camera shy. Why? A few reasons. 1) V-logs typically take less time. Just turn on your laptop camera and you’re recording in seconds. Just remember to keep your videos to 5 minutes or less, max (preferably 3 minutes or less). 2) Personality. Your warmth and personality can shine through in a video unlike a text post where you just can’t see and feel your expressions. 3) Instant YouTube content. The second-largest search engine in the world needs brand content. Give it some from your top executive with regular v-logs.

You don’t have to write a term paper 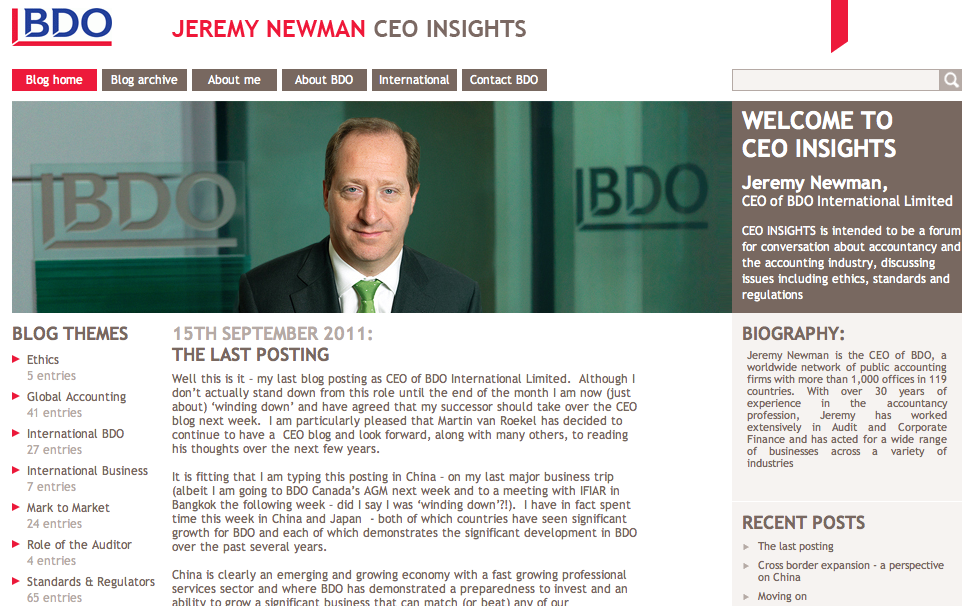 Just look at former BDO International (an accounting firm, by the way) CEO, Jeremy Newman’s blog. Posts generally range from 350-800 words. Not too long, right? How long do you think those take him to write (assuming he writes his own content)? An hour? An hour-and-a-half? Not too much time considering he only posts a couple times a month (as do most CEOs who blog). The lesson? You don’t need to write a college thesis. In fact, audiences don’t even want that. They want short, scannable content. They want lists. They want short takes they can read on the train or over lunch. So, why not give it to them?

Nothing’s worse than a memo, newsletter article or blog post littered with industry jargo. Employees are tired of it. And customers (and readers) are certainly tired of it. A blog is your opportunity to “tell it like it is.” To cut through all the corporate jargon and talk directly to your customers. Again, not breaking new ground here. But, it bears repeating.

Don’t forget to use different media

You know who does a great job here? Bill Marriott and his “Marriott On the Move” blog. In this post on Sept. 15, he talks about a manager who earned the prestigious “The Chairman’s Award” at Marriott recently. He tells a story about the manager in the post, highlighting one of the reasons why he earned this award. He posted a photo of him with the manager. And, he even included a very short video interview with the manager. Great use of multi-media–and in a great spot. Why? Because he was highlighting an EMPLOYEE for exemplary service–what better way to do that than by using photos AND video?

This is the plight of not just CEO bloggers–but most who blog today. You’ve written a post. You’re ready to hit “publish.” Then, you start thinking. And thinking. And thinking. Maybe I took too hard of a stance on that issue? Maybe I shouldn’t include that last paragraph? The urge will always be to second guess yourself. Don’t. I’m not saying CEOs shouldn’t have their posts proofed, or shouldn’t carefully consider what they say and how they say it. I’m merely saying, resist the urge to overthink. It will drive you crazy. And it will make you a lousy blogger.

What did I miss? Other tips for CEO considering starting a blog? 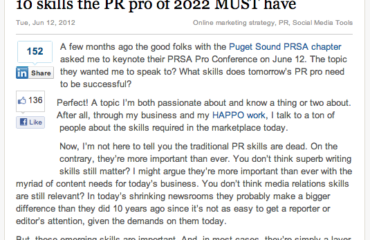 8 ways blogging has made me a better writer 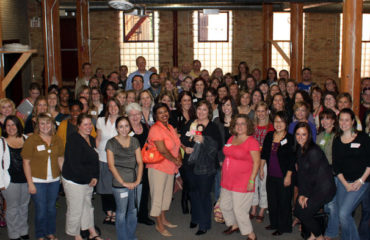 Why I’m re-invigorated about this year’s #mnblogcon