Last week, the PRSA Puget Sound Chapter asked me to lead a small group discussion around social content strategies that make sense. That got me thinking–which brands are really doing a great job with social content? Which ones really get it–but aren’t the Dells, Cokes and Burberry’s of the world that we always hear about.

So, I went to digging. And, came up with a few interesting examples of off-the-radar brands doing some pretty interesting stuff when it comes to social content.

Take a peek at the following 8 examples of companies you might not think of when it comes to creating and curating compelling social content: 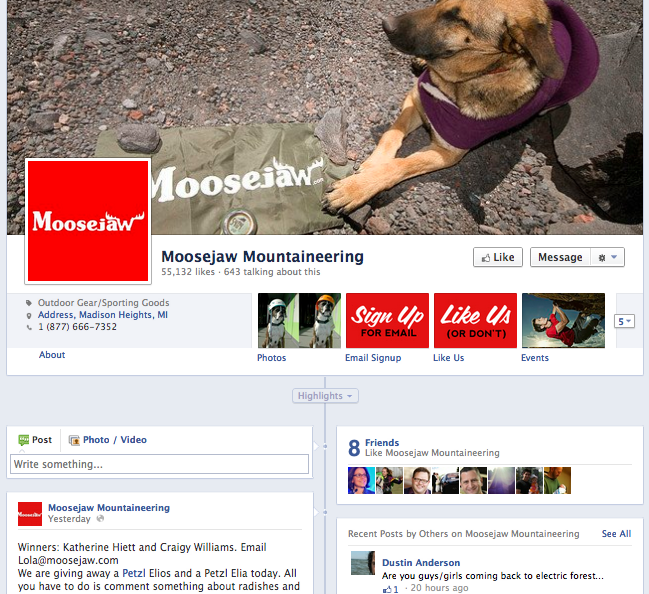 What I like most about what Moosejaw does on Facebook–it doesn’t take itself too seriously. And why should it–they’re a mountaineering brand. In fact, one recent post that garnered a ton of likes and comments was a photo of a watermelon on a deli slicer. What does that have to do with mountaineering? Not much. But, it shows personality, and it clearly resonated with their fans–which meant it got in more news feeds. I also love that Moosejaw recently used a customer photo as the brand’s Timeline pic for a spell. They recently posted updates on wildfires in Michigan–and what people could do to help. They make personal posts (“Rode to work. Did you?”). And, of course, they make lots of posts that feature their merchandise and products (and why shouldn’t they? But, it’s important to note they don’t dominate the page–they’re main goal seems to be on engagement). 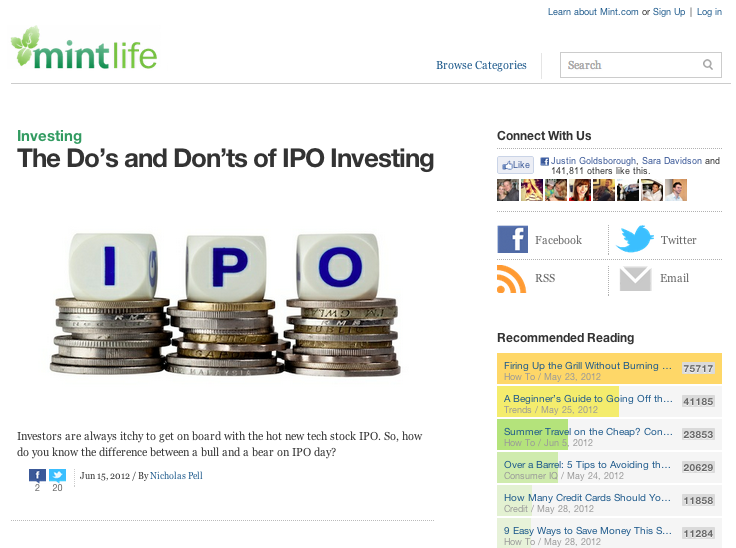 Mint.com may be one of the best corporate blogs you’ve never heard about. The brand does a fantastic job of showcasing content they know will be relevant to their customers (categories include Saving, Housing, Investing and Family)–but more importantly, much of it is what I would call “non-branded” content. What does that mean? How-to posts (“How marketing tactics can give new grads a competitive edge”), Housing (Time to go Tanklesss?), Saving (Cloth Diapers vs. Disposables), Credit (Is Credit Repair Right for Me?), and Mint Style (Rachel Weingarten: Summer Style on a Budget). And the best part? As far as I can tell, Mint.com uses a cadre of all guest bloggers. Great way to build community–and reach–for the blog. 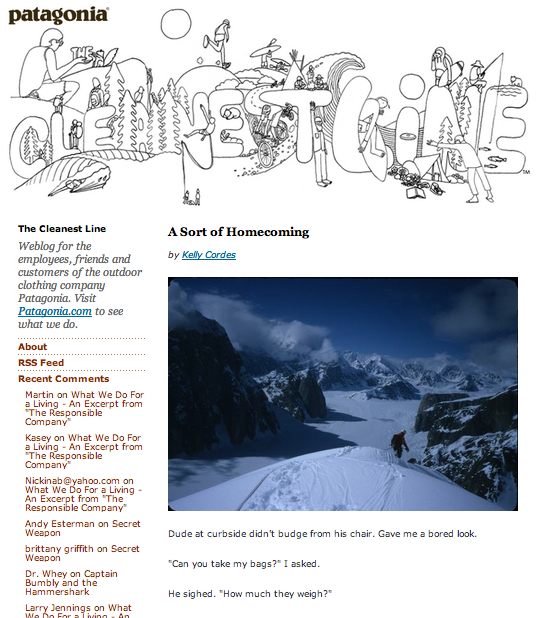 What’s great about the Patagonia blog, The Cleanest Line, is that they clearly know their audience. Sure, the blog promotes the occasional Patagonia-sponsored event (Surfilm Festibal) and merchandise (although that’s fairly rare). But, more often than not, they’re hitting on the experiences their customers relish and blogging about those. A photo blog post about a fella who traversed across Australia. An interview with Patagonia “Surf Ambassador” (cool job alert), Trevor Gordon. Or, a post detailing how Patagonia’s stores across the country took part in Bike to Work Week. 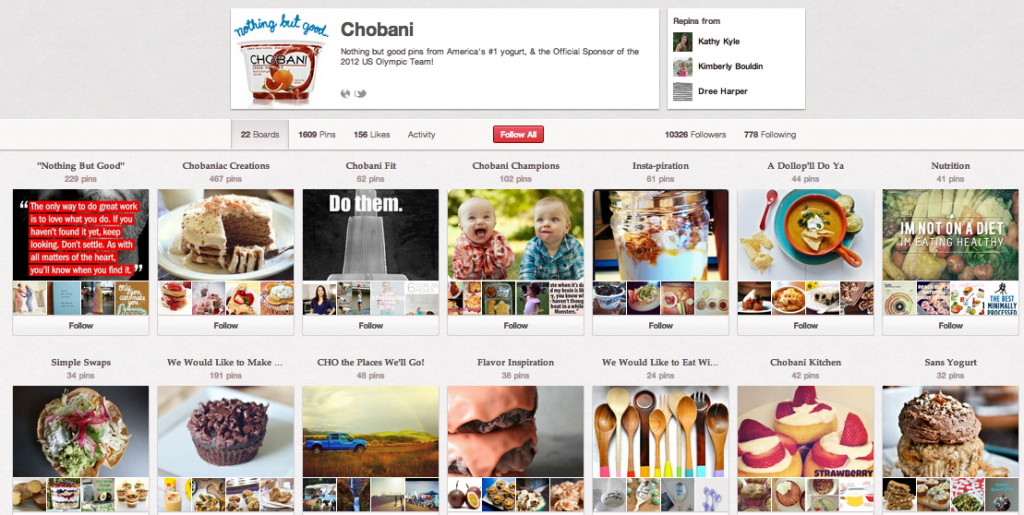 Chobani’s not the most pinned brand on Pinterest. But they seem to have a firm grasp on how to use the platform to drive engagement–and traffic–for the brand. Just look at their boards. Sure, they have the expected Nutrition, Chobani Kitchen and Holiday Treats boards. But they also feature content that pushes the envelope for the brand–yet reels buyers in. Boards like: Chobaniac Creations (all sorts of ideas), Chobani Champions (lots of pics of kids and kids eating healthy), CHO the Places We’ll Go (travel shots but also shots of the CHOMobile traveling the world); and my favorite, Insta-piration, featuring all sorts of IG pics using hash tags from #chobainpowered to the simple #chobani. 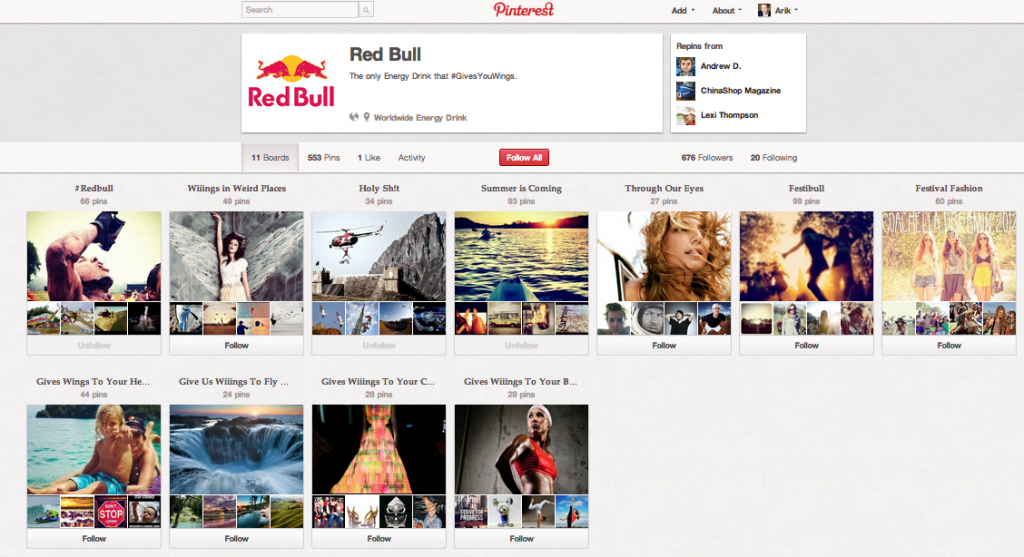 Yeah, yeah, I know Red Bull isn’t exactly “under the radar.” But, on Pinterest they aren’t exactly a hot commodity either with just 692 followers to date and 11 boards. But, I love how they’re using the tool to extend their brand personality. Some of the better boards include: Holy Shit (people doing crazy stuff, like kayaking out of a plane), Festibull (a variety of photos from their popular event), and Give us Wings to Fly Here (my favorite, made up of destinations to visit with those wings). Overall, a great example of curated content on Pinterest–I’d like to see more celebrity pics here since Red Bull does so much with celebs, but I’m guessing copyright and use laws might be getting in the way. 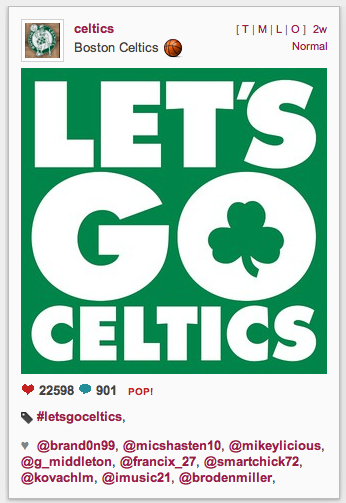 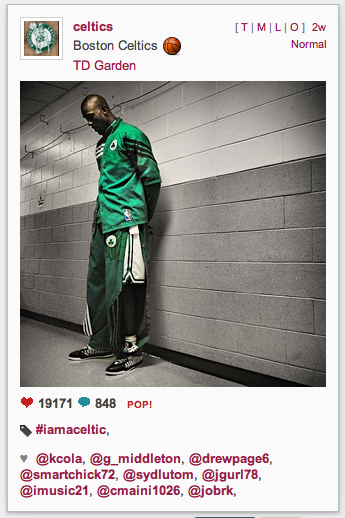 As a Minnesota sports fan, no one is a bigger Beantown hater than me. But, you gotta give it to the Cs social team. They nail it with tools like Instagram when it comes to content. Why? Because they accomplish a few things. 1–They use it as a tool to get fans excited. See the “Let’s Go Celtics!” towel above–which I actually think the entire city of Boston “liked” on Instagram that day. 2–They use IG photos to give fans a behind the scenes look at Celtics life (see pic of KG above in the tunnel before a game–very cool). And 3–They just have fun with it (see pic above of Celtics watering can putting out Miami’s “Heat.” Excellent use of the tool. Excellent use of visual content for a brand that’s not entirely based on photographic content. 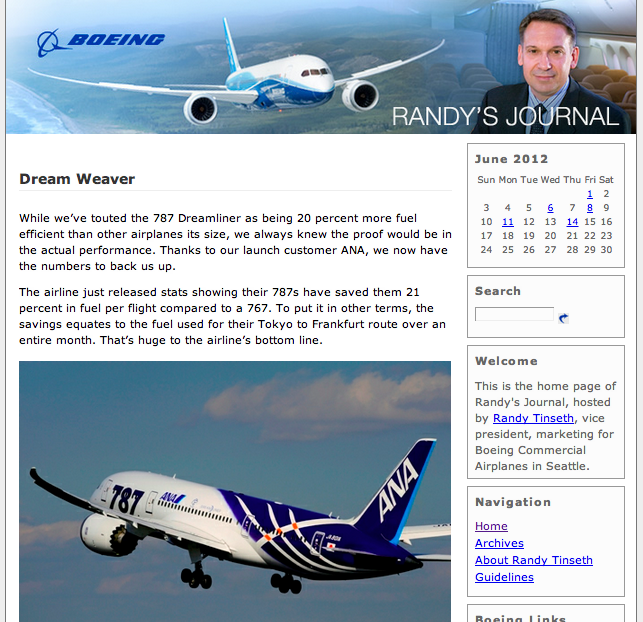 When you think content, you probably don’t instantly think of world-class jet manufacturers. But, Boeing’s got a firm grasp on their audience (Boeing geeks, essentially) and what they want to see online. Vice president of marketing, Randy Tinseth, brings that to life in his blog, aptly named “Randy’s blog.” In the blog, he showcases trips around the world to market the new jets (recently visiting Sao Paulo), insider photos from Boeing plants (very geeky) and stats and numbers that only people who REALLY cared about these big jumbo jets would read about. Not surprisingly, the blog garners a number of comments–and for a blog focused on manufacturing jumbo jets, I’d say that’s pretty darn impressive. Again, they know their audience. 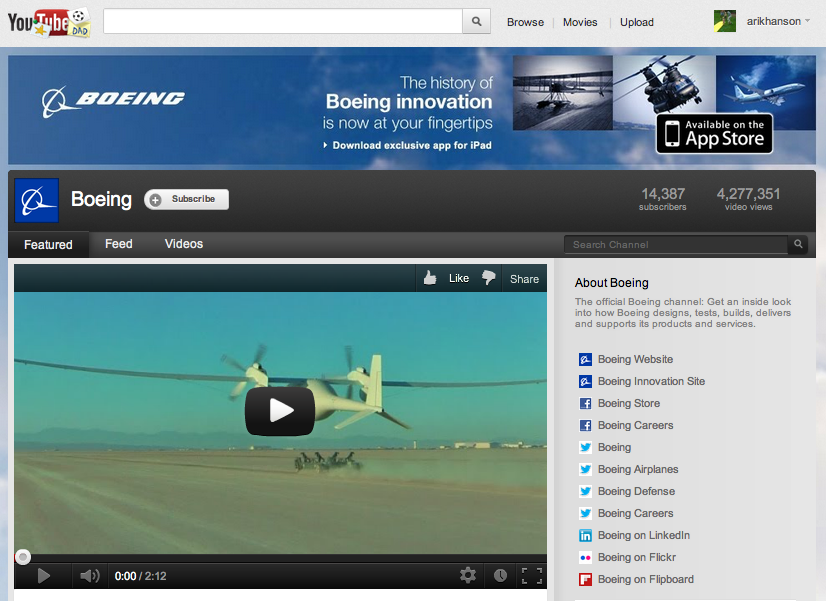 But here’s my favorite part. Boeing does incredible things with its video content. I mean, just look at the numbers. 14,000-plus subscribers and a whopping 4 MILLION-plus video views. Much like Randy’s blog, the channel focuses on some pretty geeky jet-based content. Test flights. New technology. Behind the scenes footage. It’s all a part of the channel. One video that inspired a ton of traffic and comments (98 to be exact) is this video which shows the in-depth process of how Boeing tested its Boeing 787. Keep in mind, 102,000-plus people watched this video. 98 commented. And it’s 11-plus minutes long. Impressive yet again. 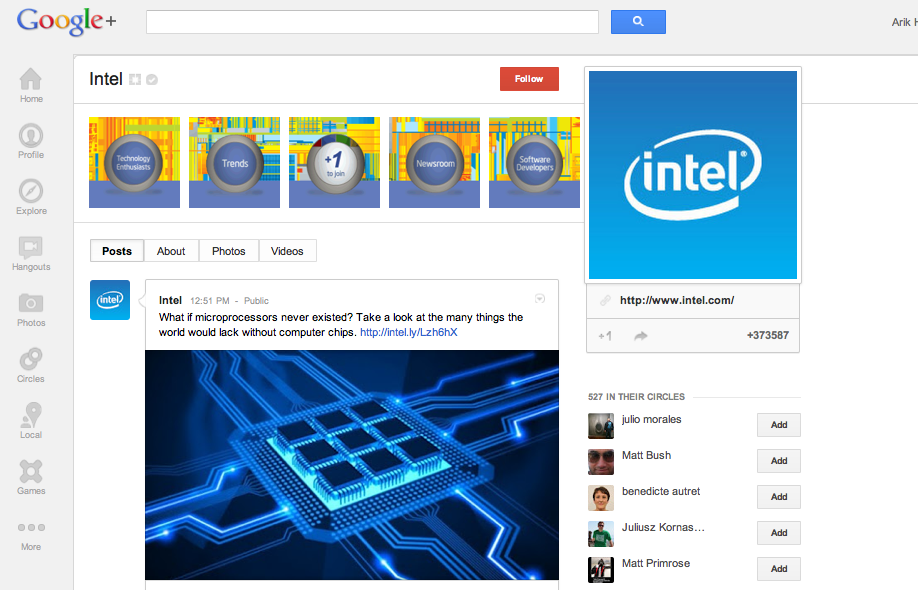 Another example of a big brand using a tool effectively to reach a key audience with content that resonates. Sounds so simple, but if it was so easy everyone would be doing it. And clearly, that’s just not happening. But, Intel excels here on a platform it knows its customers are using (Google+ is well known for its tech base). But, it’s Intel’s content that really does the trick here (after you self-identify and tell them what “user group” you’re a part of right at the top of the page–brilliant). Of course, most of the content is “branded content.” But, that doesn’t mean it’s not compelling. For example, the SciArt created by youth across the world is pretty darn cool. Or, what about the simple quotes they share in visual format (recent Picasso quote garnered 105 +s and 32 shares). Or, a recent link to an article on the company’s curated IQ site about social TV trends. Sure, they mix in a healthy dose of product promotion, but they also share a decent amount of content that’s just plain interesting to their audience.

Those are my picks. What brands do you see out there that are really understanding social content–and why? 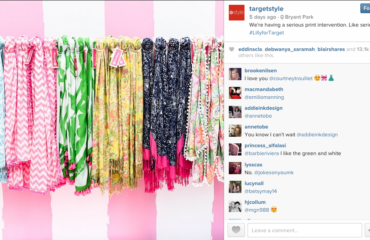