If you were one of the 108-plus million people to watch the Super Bowl yesterday, you probably also noticed an interesting trend among many of the ads.

They featured a hash tag.

That’s right, according to people who were really paying attention, HALF of all advertisers that aired commercials during the Super Bowl included Twitter hash tags in their ads.

Interestingly, only four advertisers featured Facebook in ads this year. But, the use of Twitter and hash tags was up HUGE from a year ago, when only 8 advertisers included Twitter AND Facebook in commercials.

Quite the jump, right? Most likely due to growing trend of the “second screen” experience when it comes to social TV.

Before we dive further into the numbers, let’s look at one of the more popular commercials that used a hash tag in Sunday’s Super Bowl (Note: My favorite ad was the Dodge Ram “God Made a Farmer” spot–looks like Edward Boches agreed):

So, here’s my question: Did using these hash tags in the Super Bowl ads work for brands?

Not in a bottom-line kinda way (really tough to get at, obviously), but just in terms of top-line metrics. Did people actually use these branded hash tags in conversations on Twitter during the game?

My initial thought: Probably not.

At least not in any meaningful or big way. I joked during the game to friends that the only people using these ridiculous hash tags are the people working at these companies–or the people working for the agencies representing them (half kidding).

I mean, I get why brands wanted to use them. Easy to track results and conversations. I’m with you.

But, did you see some of these hash tags? Do these look like hash tags anyone would use in tweets? Best Buy’s #infiniteanswers (too long and clunky), Subway’s #15yrwinningstreak (ditto) and Bud’s #clydesdales? Really? I’m going to tag my tweet with #clydesdales when I’m talking about drinking your beer or watching your odd commercial about beer and clydesdales (I’ve never understood that, by the way)? Why? So YOU can track it?

Needless to say, I was skeptical. But, I wanted the numbers. So, why not ask a company that gets paid to know the numbers: Sysomos.

I connected with a friend who works with Sysomos to see if I could get some data. Sure enough–they were all over it.

Here’s an infographic developed by the folks at Sysomos with the top brands that used hash tags in their commercials during the Super Bowl. 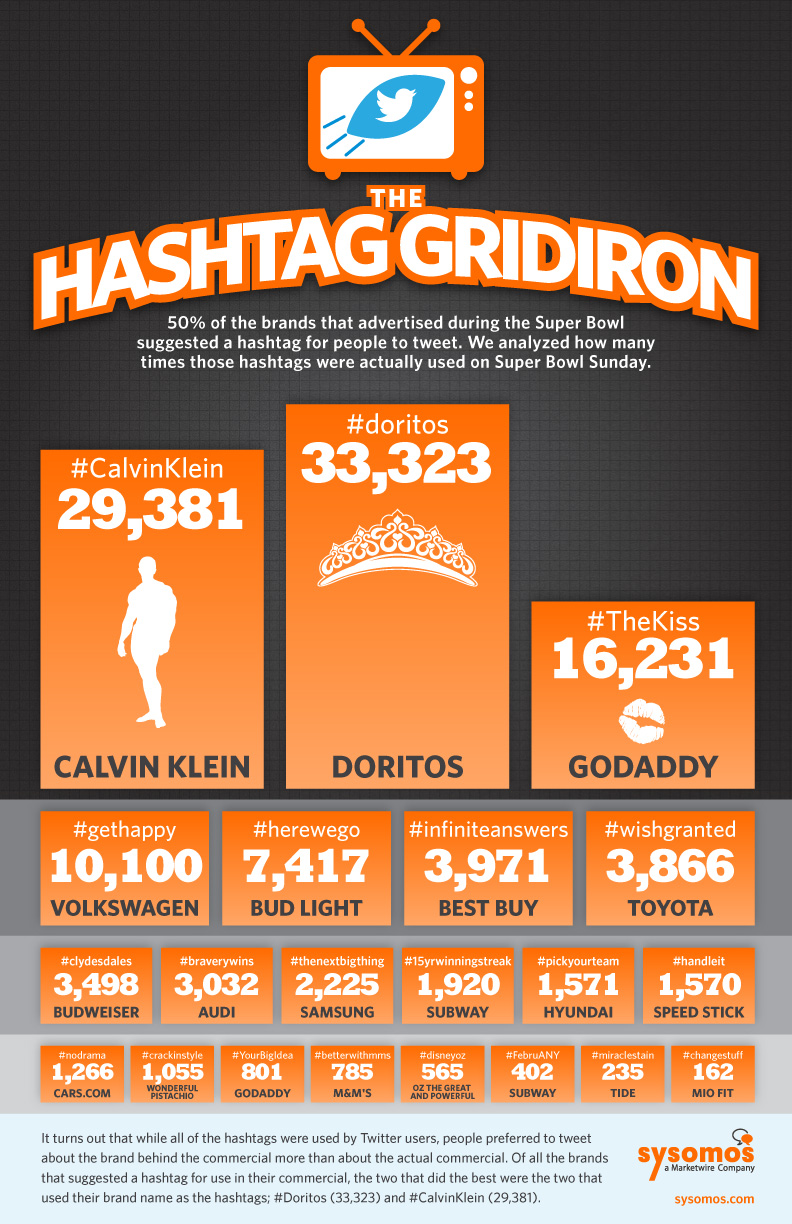 Let’s break down these numbers a bit to give you some idea of context. According to reports,  Twitter has more than 107 million active users in the U.S. Now, the Super Bowl drew 108 million viewers (roughly 315 million in the U.S., right?). Translation: Nearly 1 in 3 Americans tuned in to the game. So, if 1 in every 3 Americans tuned it, that would mean more than 34 million (roughly) people were watching the game and possibly using Twitter during it (I’m no math major, so please check that).

So, think about the hash tag numbers above. #Doritos and #CalvinKlein were the most-used hash tags by far and they only hit 33,000 and 29,000, respectively. 34 million Americans are tweeting during the Super Bowl at one point or another. That’s a pretty miniscule engagement rate (even though comparatively, the numbers are good).

Still think those hash tags were a good idea?

Most brands did, apparently. And, I think I know why. Because ad folks saw them as a “counter.” A way to “integrate” social and include a measuring device at the same time. Translation: We make the social folks happy and we have another metric for our ROI.

Only, there’s a few problems with that thinking:

The hash tags weren’t compelling to the viewers.

If we’re talking about second-screen experiences, it needs to be compelling. Show viewers an ad, then simply giving them a hash tag to use isn’t going to cut it. What reason did viewers have to tag #clydesdales in the Bud ads? Why would I use #wishgranted when tweeting about Toyota commercials or their brand? I just didn’t see many compelling reasons for the VIEWERS to actually use the hash tags.

This is not integration, folks.

I know we’re still early on in this whole digital integration thing, but this just isn’t setting the bar high enough. After all, isn’t this supposed to be the biggest day of the year for the ad industry? I’m not sure we saw one really good example of an integrated campaign yesterday. Advertisers need to do better. Note: I don’t have all the answers here–I’m simply observing.

Good way to track–not the best way to measure.

Sure, hash tags are good for TRACKING conversations. But, they’re not the best at really measuring any kind of return, outside of maybe engagement. I realize many of the brands advertising during the Super Bowl are behemoth brands that have huge advertising budgets and they’re really only after awareness (and for that, hash tags can be a piece of the measurement puzzle). But, that can’t be true for all those brands. Didn’t any of those brands want to use their big-buy Super Bowl ad to drive actual sales? Leads? Posting a hash tag at the end of your spot isn’t going to help with that.

Those are my observations from the whole hash tag trend during the Super Bowl. You watched (most likely). What did you think? 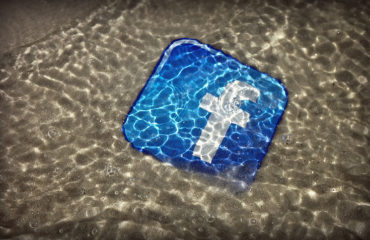 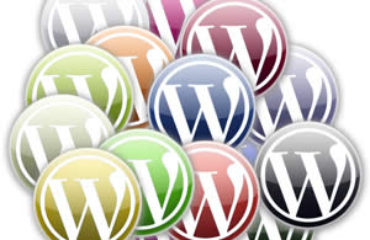 6 Comments to “ Did hash tags really work for brands with Super Bowl commercials?”