ICYMI, another “Twitter war” broke out last week. This episode featured Chick-Fil-A, Popeye’s and the king of Twitter wars, Wendy’s.

I’ve been a long-time skeptic of these Twitter battles, as I believe they add virtually nothing from a marketing/communications perspective. The only reason I can see to even pursue such a strategy is to drum up mainstream media coverage–and man, does that ever work (the media loves a good Twitter war–still in 2019!).

So, when this particular war broke out about who has the best chicken sammie, I was once again, skeptical.

However, I’ve been proven wrong. A Twitter battle can be a good strategy. In this case, you could even say it was a fantastic strategy.

But here’s the thing: it wasn’t entirely Popeye’s idea. Popeye’s was simply reacting to a single tweet by Chick-Fil-A about the rollout of its new chicken sandwich. According to reports, Popeye’s then assembled a small marketing team to come up with the following retort: 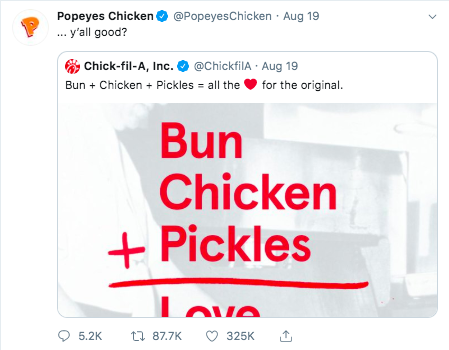 Wendy’s (again, the veteran of all Twitter wars) jumped in, but Popeye’s quickly responded. 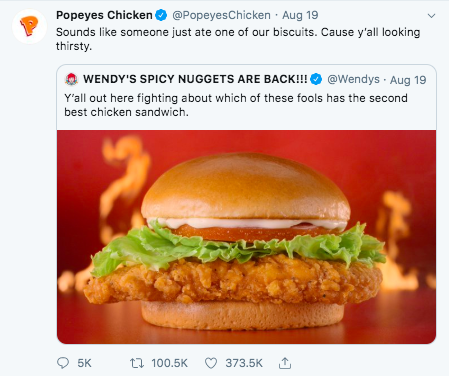 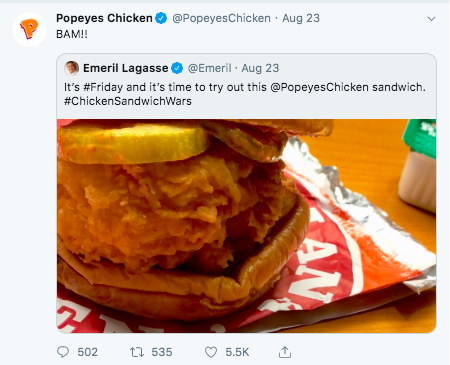 Since many of the celeb tweets I saw included no ad disclaimer, I can only assume they were mostly (all) organic. This is the kind of word-of-mouth and influencer marketing most organizations dream of. And Popeye’s was getting it, over and over and over again.

Once the fuse had been lit on Twitter, and the fire started to rage in the mainstream media, actual customers started to take an interest. And, with that interest, came curiousity in trying Popeye’s new chicken sandwich.

There has been so much interest, in fact, that Popeye’s informed us that its new chicken sandwich is now SOLD OUT until further notice.

And, for that reason alone, I think it’s safe to say we can call this one reactionary tweet a monstrous win for Popeye’s.

But, if we break down the campaign a bit more, we can see that it was also a huge win across the social media board. Just look at a few of the key metrics that Popeye’s is most likely keeping an eye on for a launch like this:

Since I’m not a Popeye’s marketing employee and I don’t typically have access to a suite of paid measurement tools, I can only react to what I see publicly. And, what we can see is impressive. Take Popeyes original tweet to Chick-Fil-A. It had 325,000 likes, 87,700 retweets and 5,200 replies. That’s roughly 418,000 engagements for a single tweet. Compare that to the average of the last five tweets Popeyes made: 1,105 engagements per tweet. Or, just take a look at a few of the influencers and celebs who shared their opinion about the new sandwich: Lagasse (6,638 engagements); Ava Alfonso (24,372 engagements) and Prentice Penny (10,573 engagements)–all well above Popeye’s pre-launch average. I’m sure when the official impressions/engagement numbers do come out, they’ll be astronomical. But for now, I think we can safely say, from a reach and customer engagement perspective, this was a big win.

Um, did you see the lines? People were actually bum-rushing Popeye’s stores nationwide. POPEYE’S! When was the last time you saw a line of more than 3 people at Popeye’s? Go ahead, I’ll wait! The lines and foot traffic was so huge that employees were working overtime to make sure people were served. And again, the sandwiches sold out in less than two weeks. Want more proof this was a big win: Popeye’s had “aggressively forecasted” it had enough sammies through the end of September for this launch. They lasted just two weeks.

The holy grail of social media metrics–and the one that’s toughest to tie actions to. But, I think it’s pretty clear that one tweet (and the subsequent media storm it set off), is what’s largely behind Popeye’s selling out the sandwiches in record time. This will be a case study social media marketers will talk about for years–I just hope it doesn’t mean we’re going to see MORE of these Twitter wars! 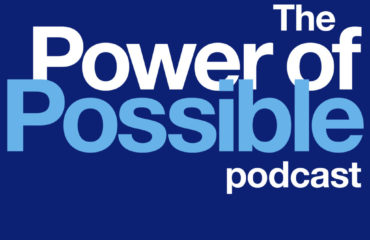 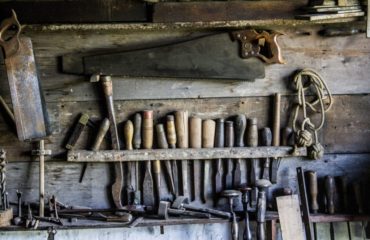 How I research influencers *without* using influencer management tools 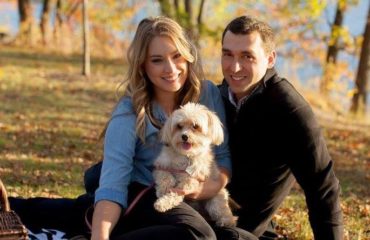