Not even American Family’s Jack Salzwedel (although he is great–I wrote about him first in 2015).

Nope, Sara Blakely, the founder and CEO of Spanx is the best CEO on LinkedIn.

And I’m not sure it’s close.

Want proof? Let’s look at the analytics. She doesn’t have the largest “following” on LinkedIn (378,000+), but Sara’s last ten posts averaged:

For reference, Mary Barra (remember she has 1.2 MILLION followers) averaged the following in her last 10 posts:

That’s a staggering difference. And sure, one is the CEO of a huge company and has 1.2M followers and the other is the CEO of a much smaller, more nimble enterprise and has 378,000+ followers. But those are wildly different engagement numbers.

Next, look at the KIND of content she posts. For example, Sara routinely participates in a huge LinkedIn hash tag trend: #MotivationMondays. But, she does it with a twist–by sharing a selfie with a different coffee mug each week. Sometimes she talks about compassion. Other times she talks about leadership. Recently, she talked about empowering women. 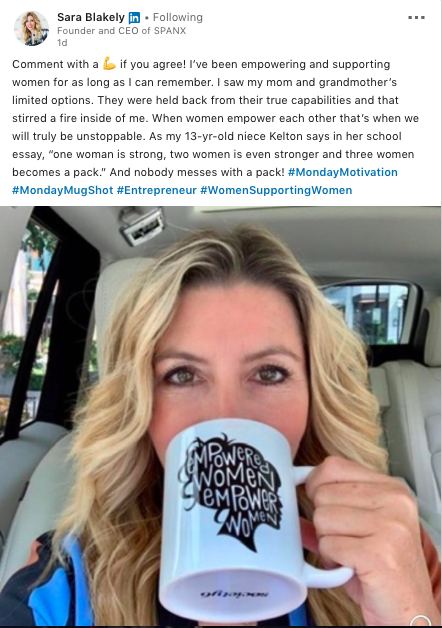 It feels authentic. It feels real. It’s free or corporate jargon. And, more importantly, it feels like she wrote it.

Now, contrast that to Mary’s recent posts, where just half of her last 10 have featured a pic and/or video that included Mary. The other half were either a branded graphic of some sort or a link image to a blog post or other GM online entity. Not that it’s the worst representation. It’s just not nearly as personal and warm as Sara.

So, Sara Blakely is the best CEO on LinkedIn. Confirmed.

If that is, indeed, true, we could all learn a thing or two about how she does it. I see four big best practices we could all put to use with our executive partners:

The number-one thing that sticks out to me about Sara’s posts? She writes like a human being–not a robotic corporate executive. See the example below of Sara’s post celebrating her 19th anniversary of Spanx. Within that note, you see her talking like a real person would talk on LinkedIn. She uses emojis to signify sarcasm. She uses everyday references like “AKA” (and, actually, using all caps makes it that much more human). And, I don’t see one mention of “synergy”, “value-added” or “circling back.” It’s content written by a real person using real, everyday language (read: NOT MBA speak). That’s what connects with employees and prospective employees. That’s what people want from leaders. And, it’s a huge reason why she’s so likable on LinkedIn. 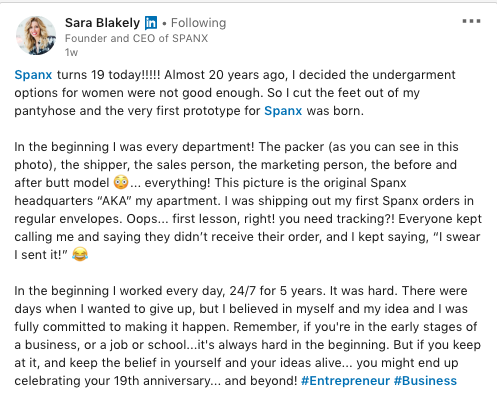 Don’t be afraid to be imperfect

Here’s the visual part of the post above celebrating Sara’s 19th anniversary with Spanx: 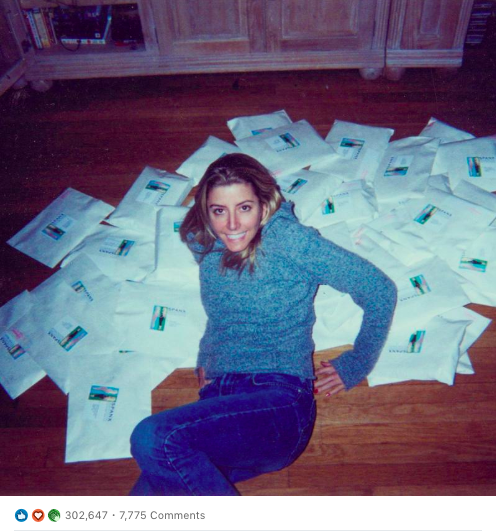 Now, this certainly isn’t the most flattering photo of Sara. Not to mention, it’s 20 years old now! It’s imperfect. But, it reflects on a memory that is very personal and important to her. And, more than that, it shows that Sara is just a person–just like you or I. Or, what about this post that shows her old apartment with boxes of Spanx stacked high. What executive do you know who would share a pic like this of one of their first, run-down apartment residences? 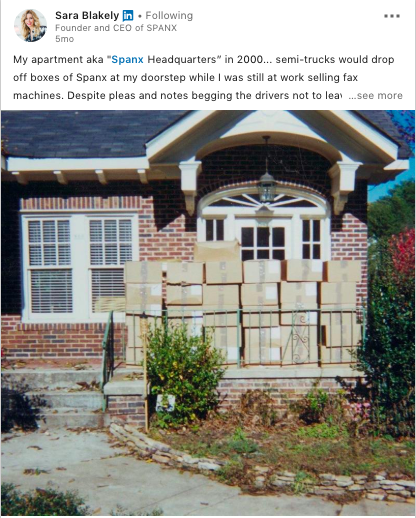 Imperfection like this connotes human-ness. And, not to beat this horse to death, but that’s what employees, prospective employees and people want from their leaders. I’ve never really understood execs’ desire to be perfect–in text, in photos and in videos. It just never seems “real.” I guess it comes off exactly the way execs’ intend it to–perfect. But, that’s not what people want. Not in 2019. They want real. They want authenticity. They want leaders who feel, act and write/speak like real people. The days of perfection in communication are long gone, my friends.

Some of Sara’s most successful posts recently have come using what I would call “impromptu creative.” Case in point–this post: 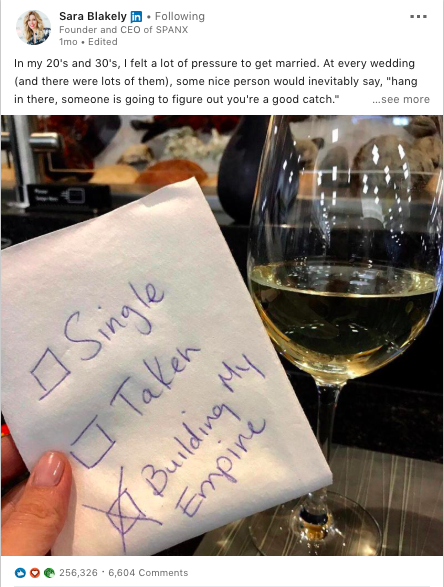 It’s a simple, motivational message. The kind you see a ton of on LinkedIn. But, the visual is what makes it pop. And, it’s a visual that feels very much like “I was just having this glass of wine and I came up with this idea”. And, that very well might be true! Regardless of how they develop this “impromptu creative”, it works. Again, it gives off the feel of a leader who’s much more closely connected to the average employee than your typical Fortune 500 executive. After all, isn’t that what we’re after here? Building trust between our leaders and employees, prospective employees, customers and vendors? Isn’t that the end goal? If yes, then more imperfect content and more impromptu creative are ways to start bridging that gap. Because, for a lot of companies, that gap is pretty damn big.

When I’ve worked with execs on LinkedIn in the past, I talk a lot about capturing content “in the moment.” Here’s a good example of how Sara did that in a recent post: 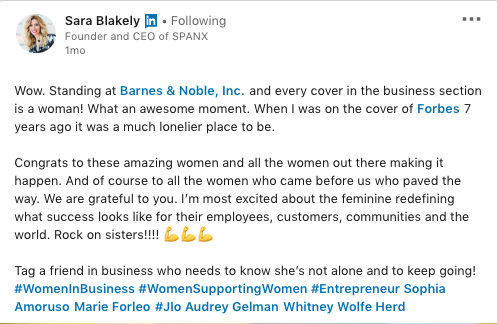 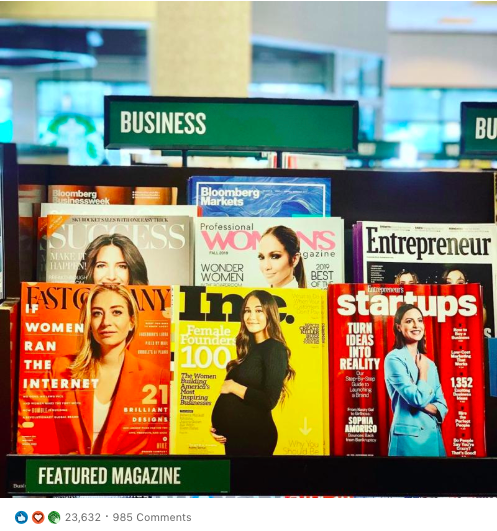 This post captures a moment in time brilliantly. She was shopping at B&N. Noticed all these pubs featured women. She snapped a pic. And built a post around it. Now, it very well could have been a previously planned post, but it doesn’t really matter, does it? It SEEMS like an in the moment post. It SEEMS like she just got a pic of this and shared her thoughts as it happened. And again, it makes her appear more human. More “like me.” Someone who’s just shopping at B&N on a Tuesday night. People can identify with that. You know what they can’t identify with? Stock splits and share prices. Coach your execs to capture more “in the moment” content and those walls will start tumbling down. 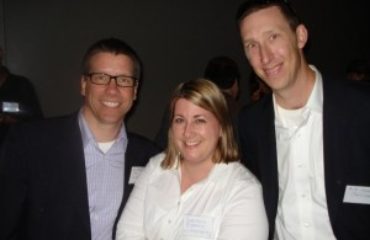 4 networking lessons I learned at BlogWorld 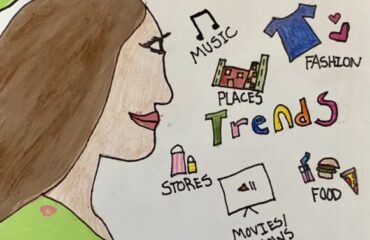 What can social content marketers learn from Shutterstock’s 2021 visual trends? 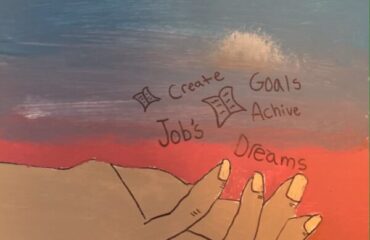 How title-chasing can sometimes backfire