My motivation: Don’t tell me I can’t achieve that goal

A few weeks ago, friend, partner and client, Stacia Nelson, made the following post on her Facebook page. 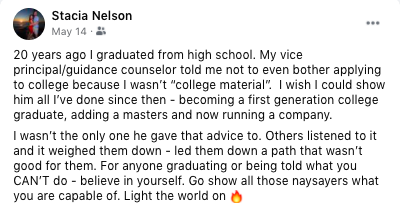 The message: Don’t tell me I can’t achieve that huge goal. I’LL SHOW YOU!

That post resonated with me a ton, because it’s exactly what I’ve used to motivate myself throughout my life and career.

I remember when I was an aspiring high school golfer, people said “you’ll never play in the State Tournament. No one from Woodbury has ever done that.” A couple years later, as a junior, I had played my way into the Minnesota State High School League Tournament–the first Woodbury player to ever do so (we won’t talk about the 88-91 I shot in my two days in the tournament though!).

My motivation? To prove to those people who said I couldn’t that I could.

Fast forward 20 years. As I considered starting my own business 11+ years ago, I remember people saying: “You’ll never work with Fortune 500 companies. They already have big agencies they work with. Why would they hire a solo like you.”

My motivation? Don’t tell me who I can’t work with. I can and will work with Fortune 500 companies.

A number of years ago, I remember talking to people about serving as an adjunct professor–specifically at St. Thomas where I really wanted to teach. “You need an MBA,” many said. “You don’t have teaching experience,” others said. A couple years later, with the help of Aaron Zaslofsky and Bruce Morehouse, I was teaching my first class.

My motivation? I’ll show you I can teach at St. Thomas! You will not tell me that I cannot do this!

For those that watched the Jordan documentary recently, you may recall MJ literally making up incidents in his head of other players slighting him, calling him “old” or minimizing his skills. He used this as motivation to raise his game to the next level.

That’s kinda how I feel when someone tells me I can’t do something.

My most recent example: skiing.

I started this past winter as a way to spend time outdoors in the winter with my wife and daughter (we took lessons at nearby Hyland Hills in Bloomington). I remember some people saying “aren’t you a little old to start skiing?” and “skiing’s pretty tough to pick up at age 47!”.

Once again, I set out to prove those people wrong. This last winter, we took lessons and bought a pass at Welch Village near Red Wing. I probably went skiing 5 times in Feb. alone–and I got better each time. I’m not skiing Black Diamonds yet (far from it, actually), but I’m skiing. And, I’m working toward that goal (next up: skiing a big mountain out west!).

It will never stop. I’m a goal-oriented person. And, a very competitive person. So, I need that motivation.

What mechanisms do you use to keep yourself motivated? 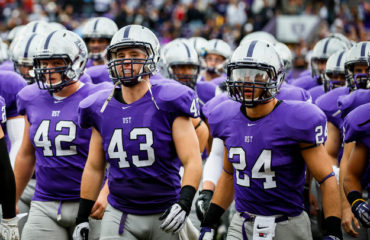 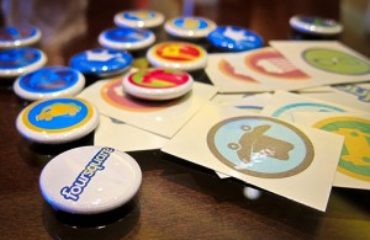 Does broadcasting your Foursquare check-ins on Twitter really add value for brands?