Can Klout really be a social media management tool?

No longer was Klout just going to be a social scoring platform designed to help manage “influence.” Now, it claims, it will help you BUILD your influence by helping you discover new content it believes your followers want and need.

Now, that sounds good on the surface, but don’t we have tools that do this already–and conceivably better than Klout can?

After all, we already have tools like Feedly (my favorite), Flipboard and Zite, just to name a few.

But since Klout insisted it could deliver in this area, I thought I’d give it a little deeper look. Here’s what I found:

That’s a bit blunt, I know. But really, Klout fails to deliver here big time. In a recent post, Klout had this to say about how it was different from other apps that deliver content:

“Other apps and news readers that surface content are solely intended for your personal consumption. Klout, on the other hand, intelligently recommends content that will strike a chord with your unique audience on social. We can do this because we understand both the topical interests and the cross-network behavior of your audience.”

But, when I visited Klout to “discover” new content under the “PR” category recently, here’s what I found:

* 1 article from something called “JohnnyJet.com”

Anyone who’s anyone in the PR field probably already reads PR Daily on a regular basis. And Spin Sucks (Gini Dietrich’s blog) is one of the most popular PR blogs on the Web. So, I’d say a lot of people already read those sites.

And the other posts Klout uncovered were either off-base or irrelevant. The article from JohnnyJet was an interview with a PR travel pro (off-base). And the article TheSource.com delivered was about an ad the lost Malaysian airlines ran a few years ago that is now a bit uncomfortable.

Bottom line, of all the articles Klout uncovered for me, none were what I would consider nuggets of information people who “follow” me would be interested in. 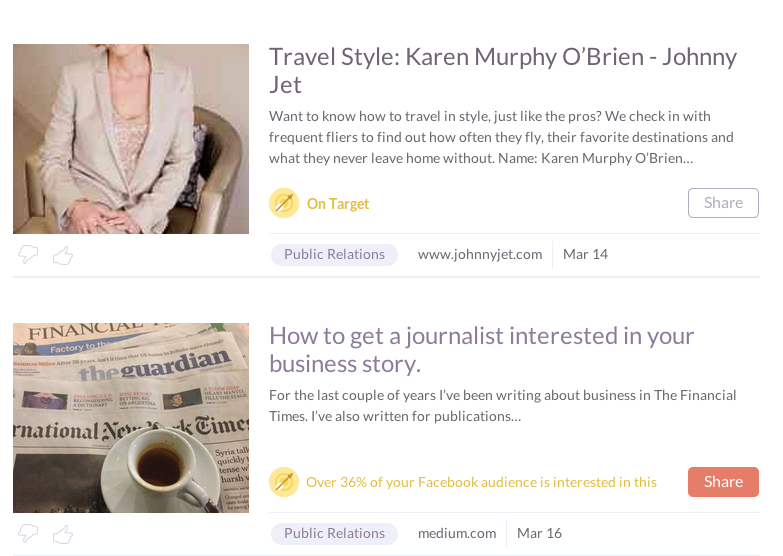 I think Klout is lying

Here’s what Klout has to say about where it finds the content surfaced in your stream:

OK, note the language: “hand-curated list of thousands of RSS feeds from diverse publishers.” We just talked about what popped up in my feed under “PR”–3 PR Daily articles and 2 posts from Spin Sucks. That from a complete list of 10 posts (at the time I checked, at least, yesterday). So, out of 10, 5 were from PRD and Spin Sucks. Doesn’t sound very “diverse” does it?

Let’s take a look at another category I follow: Social media.

* 2 articles from something called PsychCentral.com

So again, six of the 10 articles were from three sites–two of which are wildly popular in the social media world and one that’s a psychology-based site. Is Klout really pulling from “thousands” of RSS feeds, or are they pulling from some of the most popular PR/social media sites on the web (what’s next, Social Media Today articles?) and wildly irrelevant sites (again, I almost expect to see a Buzzfeed article in my feed).

I’m sure this will come as a surprise to no one, but your brain is MUCH better at discovering new content on the web than Klout. Want proof? Let’s look at the social media category again. Again, TWO article out of 10 were from a psychology-based site. But, isn’t psychology a big part of social media, Arik? Sure, I’ll grant you that. But, if you look deeper at the article titled “How to make your life happier through social media” you can see it’s more about how social impacts your mood and well-being than it is about social media and the marketing world. 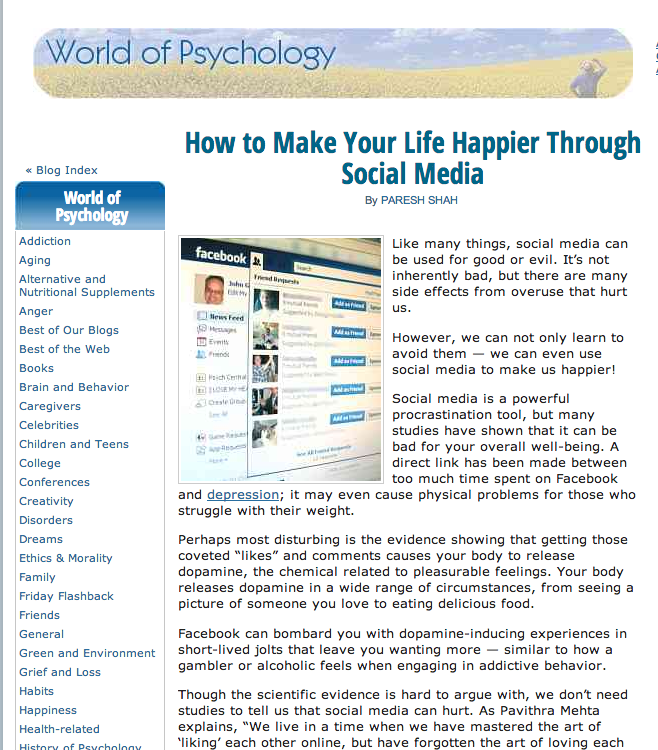 I would guess most of the people who follow me online are most likely interested in PR/social media/marketing approaches from a business perspective. After all, that’s what we do for a living. Very rarely do I share article like this. But, Klout thinks it’s relevant. Why? Maybe because social media’s in the title or body copy. I don’t know. And frankly, I don’t care. What I do know is this is not an article I would share with people who I would consider worthy colleagues. And I know for a fact they would not find it interesting or click on it.

So, how smart is Klout really? Not very. The lesson (and it’s not a new one): Your brain is much smarter than Klout. Continue to exercise it.

Don’t we already have a social sharing tool we like and use?

For most of us, the answer to this question is yes. Whether it’s Buffer, Hootsuite or Tweetdeck, most of us have a social sharing tool we use religiously at this point. And, it’s awfully hard to break a habit. Especially when that habit is working. 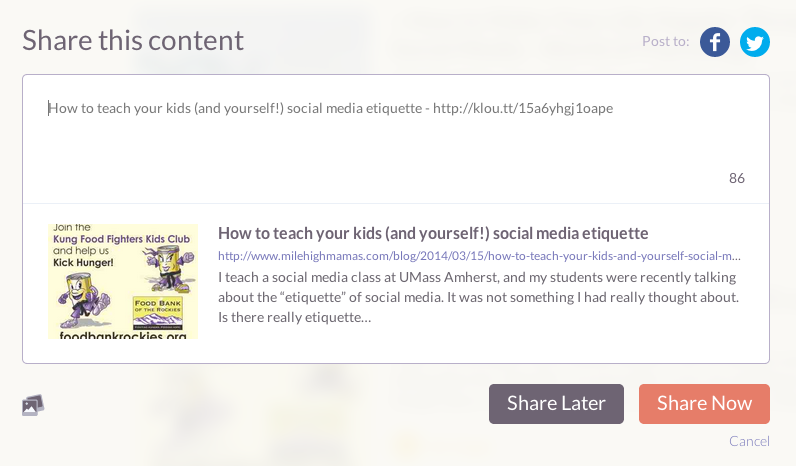 So, why would anyone switch to Klout? I’m not sure I can answer that for you, but for me the answer is “I wouldn’t.” The tool is just too basic and doesn’t seem to offer anything I can’t get anywhere else.

So, that’s my two cents on Klout’s new content discovery and sharing tool. Have you tried out the new Klout tools yet? If yes, what do you think?

Keeping up with social media–in 30 minutes a day (you heard me!) 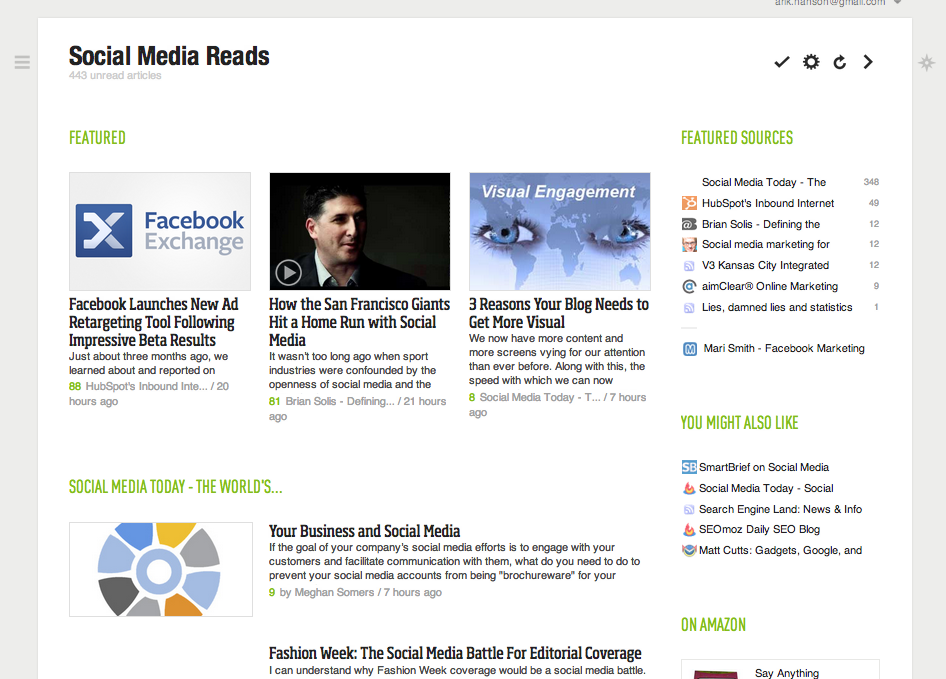 Does this scenario sound familiar? You’re stuck in meetings all day. You have absolutely no time. Yet your boss is asking you to stay on top of all things social media-related. And, you need more information to do your job more effectively–and efficiently. And you want to stay smarter about industry trends.

Did I get that about right?

This is the topic I presented on at the Southern Public Relations Federation Conference in Destin, Fla., yesterday to a group of PR professionals from Florida, Mississippi, Alabama and Louisiana.

In my presentation (see the full Prezi below), I lay out 8 strategies for staying up-to-date on all the changes, new products/tools and trends in the digital world. Let’s get to it!

I start most days by scanning my Feedly page. For the uninitiated, Feedly is a blog reader tool (much like Google Reader). I use Feedly because I like the way it’s laid out, but most folks use Google Reader. You can use either. The point is, get organized about your blog reading system. I organize my blogs by geography (MN blogs), discipline (PR, social media, mobile), clients (industry blogs) and other miscellaneous categories (fun, business blogs, etc.). With Feedly, I can scan headlines of these blogs in about 15 minutes a day (I give myself a hard stop). I look for posts that would be relevant to clients–and interesting to me. I bookmark those I think meet those criteria, maybe share them on Twitter/Facebook and move on. 100 blogs in 15 minutes. Believe it.

Strategy #2: Scan and Save

This is where a social bookmarking tool called Diigo does some serious heavy lifting for me. I use Diigo to not only archive posts (by tags/topics), but also to share them using the handy little Diigo bookmarklet on Diigo (see below).

My Diigo archive is a goldmine of articles and blog posts I’ve saved over the last 5-6 years. I use these articles and posts in presentations, client decks, blog posts and for reference in client meetings from time to time. It’s invaluable information–and it’s all at my fingertips because of this “scan and save” process I’ve developed (not all that groundbreaking, keep in mind). Other folks use tools like Instapaper and Delicious–which is fine. Everyone has tools like prefer. The point is develop a process where you can scan and save a lot of posts/articles on the Web quickly and efficiently.

You know that time you waste each day standing in line for coffee, on the bus commuting or (gulp) in the bathroom (don’t lie, you know you do it)? You need to start using that time to your advantage. Use tools like Flipboard, Reeder (iPhone app) and Cadmus (great tool for catching up with what you missed on Twitter since you last signed in–see below) to keep on top of industry trends and business news. You have to maximize your downtime. 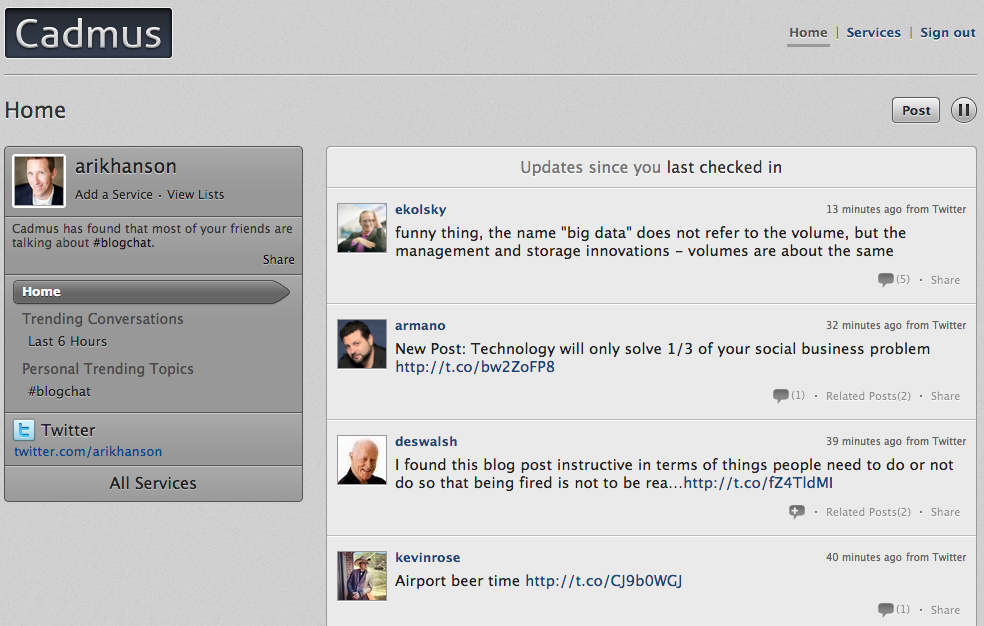 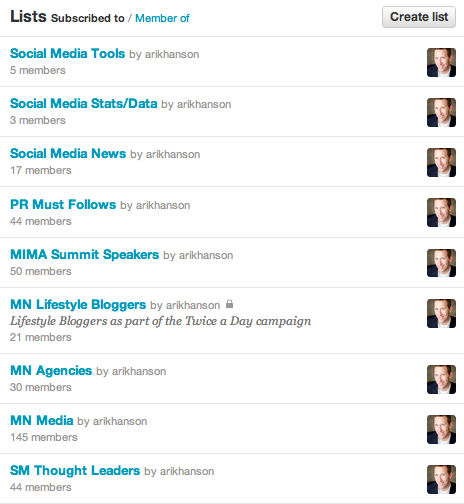 Strategy #5: Turn on the radio

Obviously I’m not talking about THE radio. That went out of style about 15 years ago, right? 🙂 I’m talking about podcasts. Again, think about your downtime. Specifically, think about the time you’re captive, where you have nothing to do but the task at hand. For me, it’s moving the lawn. I throw in the ear buds and spend 45 minutes mowing the lawn AND listening to my favorite podcast (and thus, getting smarter about my craft). My favorite? The long-running For Immediate Release, Marketing Over Coffee and Jay Baer’s new podcast, Social Pros where he interviews front-line social media folks doing REAL work. Very useful.

Strategy #6: Keep tabs on news in your industry

You know, there’s an easy way to do this. It’s called Google Alerts. Set them up for journalists, keywords, even competitors in your industry. But, I also discovered a new tool called Newsle recently (thanks Heather Whaling!) that serves you up alerts (emails) each time one of your LinkedIn, Facebook or email database contacts is featured in a news story. Might not seem like much, but this gives you a great way to keep tabs on journalists you’re trying to develop relationships with, colleagues in the industry, business partners and other influencers. All of which you want to stay connected to. Here’s an example of an email I received on a news story friend and local agency leader Blois Olson was featured in recently. 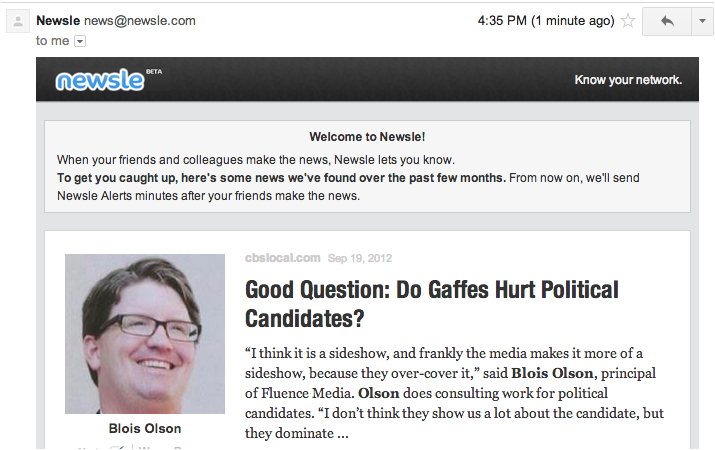 One thing I learned a while ago when it comes to curating content. If someone else is doing it better than you, steal from them 😉 I shamelessly do this with my friend Heather Whaling’s blog, which curates the best posts from the previous week on her blog, PRTini. Why should I reinvent the wheel? Heather already has all the spokes in place. Or, what about Social Media Examiner’s weekly roundup? Or, what about Sarah Evans’ daily Commentz enewsletter? One of the few enewsletter I read on a regular basis. Don’t do all the work yourself–seek out those sources that already exist and use that information to your advantage. 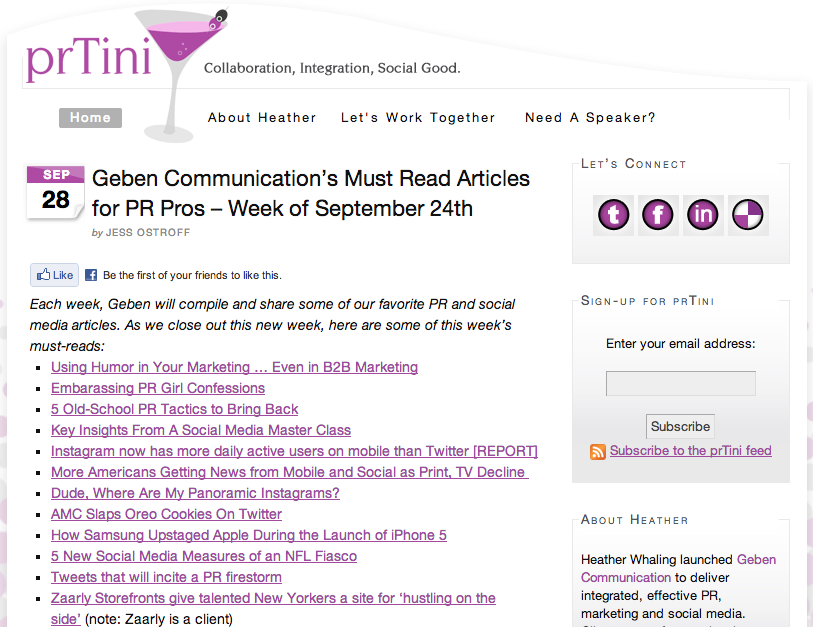 Curating your own content can be just as powerful as reviewing others that have done it for you. Especially when there are tools that can do the curating for you. Like Paper.li. Many folks use Paper.li as a tool to curate content and then share that content on Twitter. I, however, use Paper.li to curate content and consume it myself. Why? Because Paper.li does all the heavy lifting–and serves me up a daily/weekly digest of posts from people Paper.li thinks I find influential/interesting. Pretty handy, right? See below for an example. 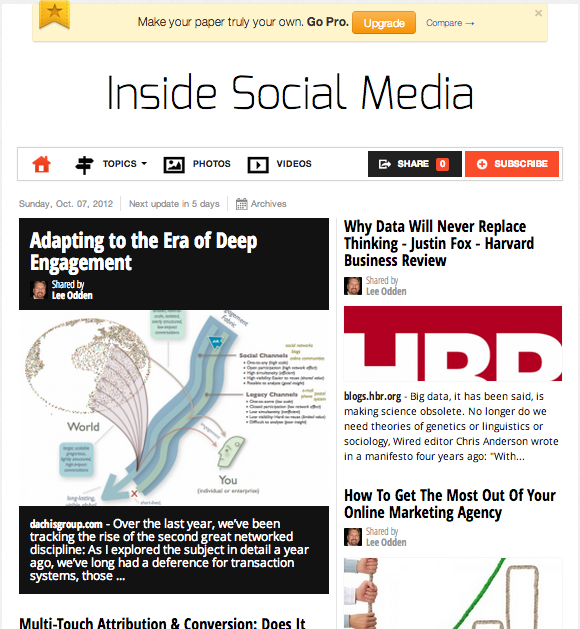 Anything you’d add? Oh, and here’s the full Prezi below: